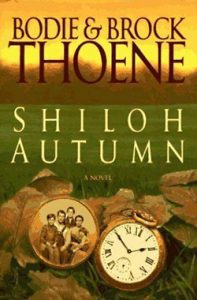 Who could have known their way of life would be blown away with the wind…in one day?

In the autumn of 1931, Birch and Trudy Tucker are proud of what they’ve built with their love and labor in Shiloh, Arkansas. The farm produces fin cotton. The pantry and cellar are full of food for the winter. Tom and Bobby are old enough to help with the family chores but young enough to get into mischief. Little Joy is the joy of his mother’s heart.

To the Canfield family – once sharecroppers – Shiloh is a dream come true. Jefferson and Lily, their babies, and his parents, Hock and Willa-Mae, are reunited, and Jefferson farms his own land. Then, on October 1, 1931, disaster strikes. The cotton market collapses in Memphis, and the little town of Shiloh is hit hard. It will take a miracle to save what Birch, Trudy, and so many others have labored to build. Yet even the forces of nature seem to conspire against them…

Based on the lives of Bodie’s grandparents, Shiloh Autumn is an inspiring story of courage, faith, love, and the healing strength of forgiveness in the face of loss and betrayal.

We have a limited number of copies available for pickup, but you can find copies through our Evergreen Card Catalog.